As I walk up the Bob’s Country Bunker in Nashville, TN I see this man taking tickets at the door.  He is just singing the praises of the singer they have tonight.  I look back at the sign which reads: “AK47 and the Hoochie Coochie Dip Spitting Pistol Whippin’ Ghetto Cheerleaders”.  I thought to myself, “What in the hell has Alan got me into this time?  What is this? Rap night?”.

I walk into Bob’s Country Bunker, and lo and behold, there is Alan Keyes singing George Straight’s classic hit, “You Better Baby Your Baby.”  His back-up singers consisted of 1 black girl, 1 indian girl, and one white tranny (who had the best voice of them all if I’m being honest).  It wasn’t as bad as I thought it would be.  The following transcript is what occured right after that song ended:

Keyes: Ladies and Gentlemen, thank you! Thank you!  We’re taking a break and we’ll be right back…

Inspector G: “So what to you have for me this week, Keyes?”

Inspector G: “What are you doing?  You going ‘nanna nanna boo-boo’ on me right now?  For real?  Besides, I’ve been quite fond of your ‘Keyes’ to the game and have talked you up.”

Keyes: “Ha!  I hear that.  I also heard you actually half-way convinced some chick at Amici in Athens that these little chats we have were, in fact, real.”

Inspector G: “I know of the woman of which you speak.  There is a possibility that this is true.”

Keyes: “Well, anyways here are my Keys To The Game:  As you know, UGA’s offense (and its coordinator) have been heavily scrutinized as of late for their do-what-you-need-to-win-and-keep-the-points-differential-within-2-scores mantra.  I think some fans and pundits need to take a step back and remember that there is no reason to push things down the field so much and score 50+ a game when your defense is  absolutely monkey-stomping the fuck out of the opposition and leaving the wounded behind.

In such a scenario, there is no need to ‘go deep’ all the time, sustain short quick scoring drives for points that may or may not yield enough risk/reward for the cause.  Look, Bobo called the deep shots several times, but Murray only hit on 2.  And that’s ok.  The point is to use up as much clock as possible and then that time on the scoreboard represents just as much of an enemy as a 20 point lead (although that, just for once, would be nice).  I look for the offense to continue running the ball, setting up play action for a couple of deep balls.  I have a sneaking suspicion that Murray will connect on a few and Vandy will be out of this game before they can get a touchdown on offense (which if you’ve been paying attention, their TD’s come FEW and VERY FAR between).  I see Crowell getting the bulk of the carries in the first half, hopefully racking up close to a hundred and a score, then resting him for Samuel and Thomas.  We need him 110% for Florida, you know.

As for the Defense: I shall sum this up in one picture and one only: 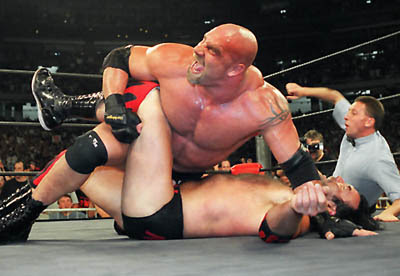 Special teams: Punt, Kick, Field, Return.  No fumbles, no shanks, no muffs.  NO BLOCKS IN THE BACKS.  Blake Sailors for president.

That is all.  It’s time to go back to my set.  I’ll dedicate this one to you…

One Response to ‘Keyes’ to the Game: Dandy Vandy Edition